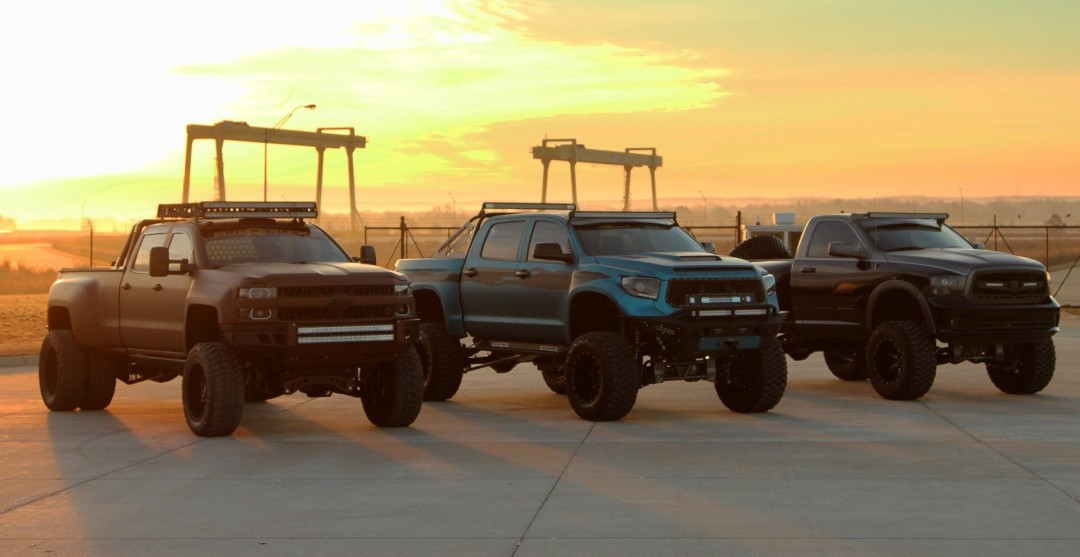 Builder Profile: Who Is KEG Media? 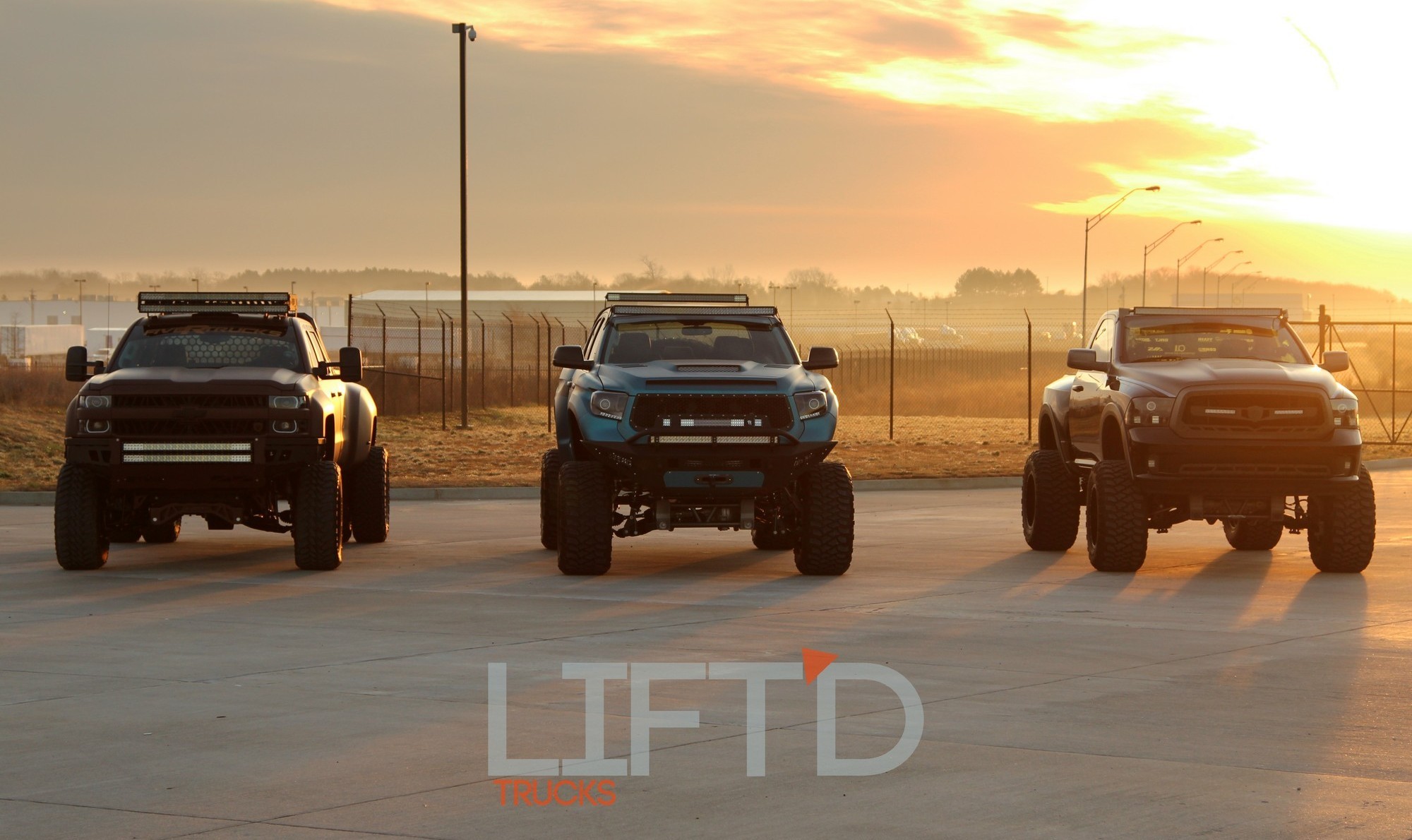 For nearly 15 years, KEG Media has been leading the way when it comes to custom automotive renderings, from bagged 4-doors to lifted trucks. This is all thanks to the quality work that owner Robbie Bryant has put into his company and continues to do so with a handful of loyal employees and a very supportive family. But KEG Media isn’t only about renderings these days. In fact, the company is one of the major contributors to the annual SEMA Show in Las Vegas, bringing several vehicles they’ve designed and had built for themselves and their customers to display in their booth along with various industry partners, two of which we have featured in the premiere issue of Lift’d Trucks.

With such a great reputation and remarkable work behind them, we wanted to know the ins and outs of KEG Media: what started it all, what makes it tick, how Robbie continues to set industry standards and where the company is headed in the future. So we went behind the scenes to talk with the very man behind all the madness and asked him a few questions to share with you. This is what Robbie had to say about family, his company and success: 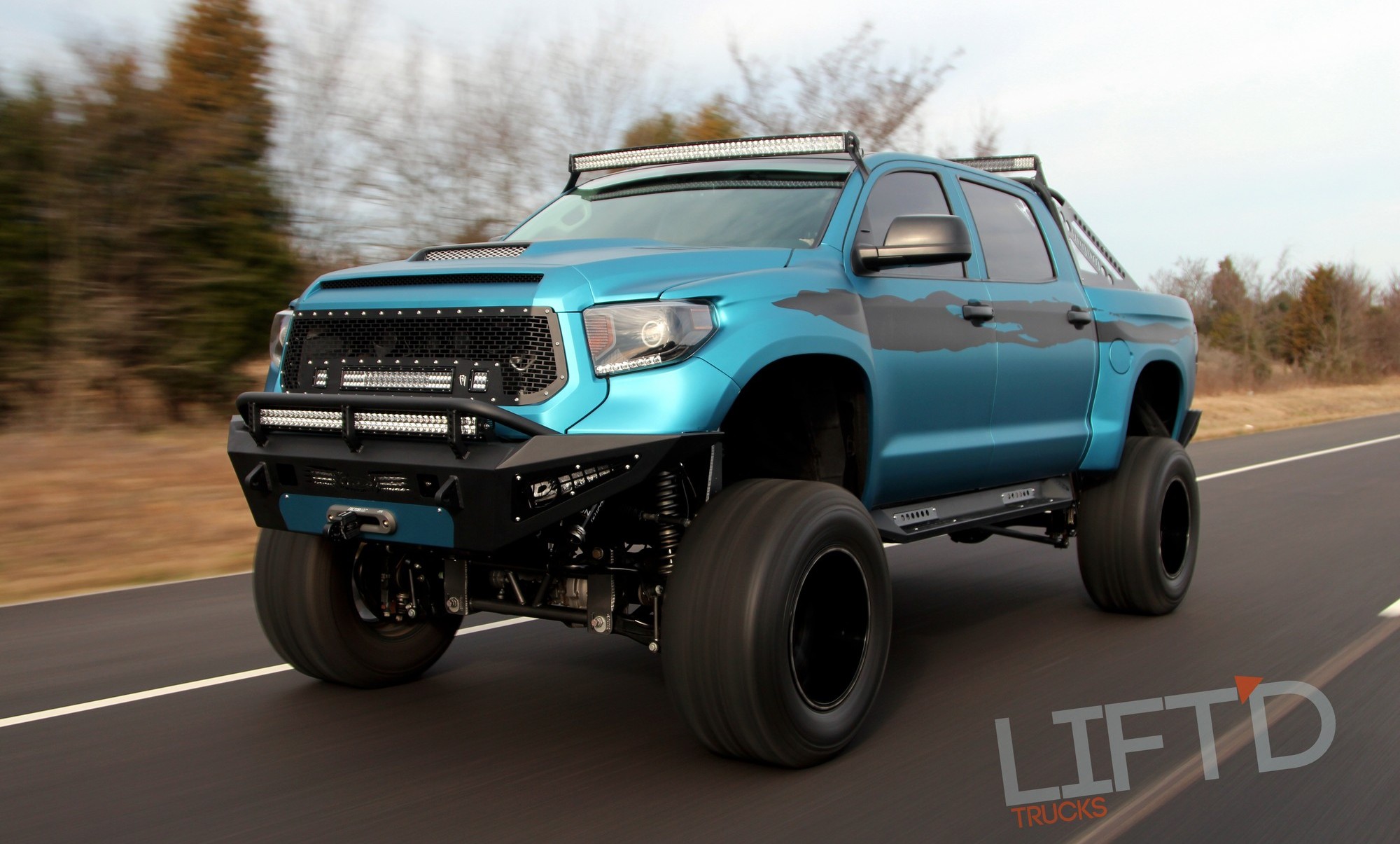 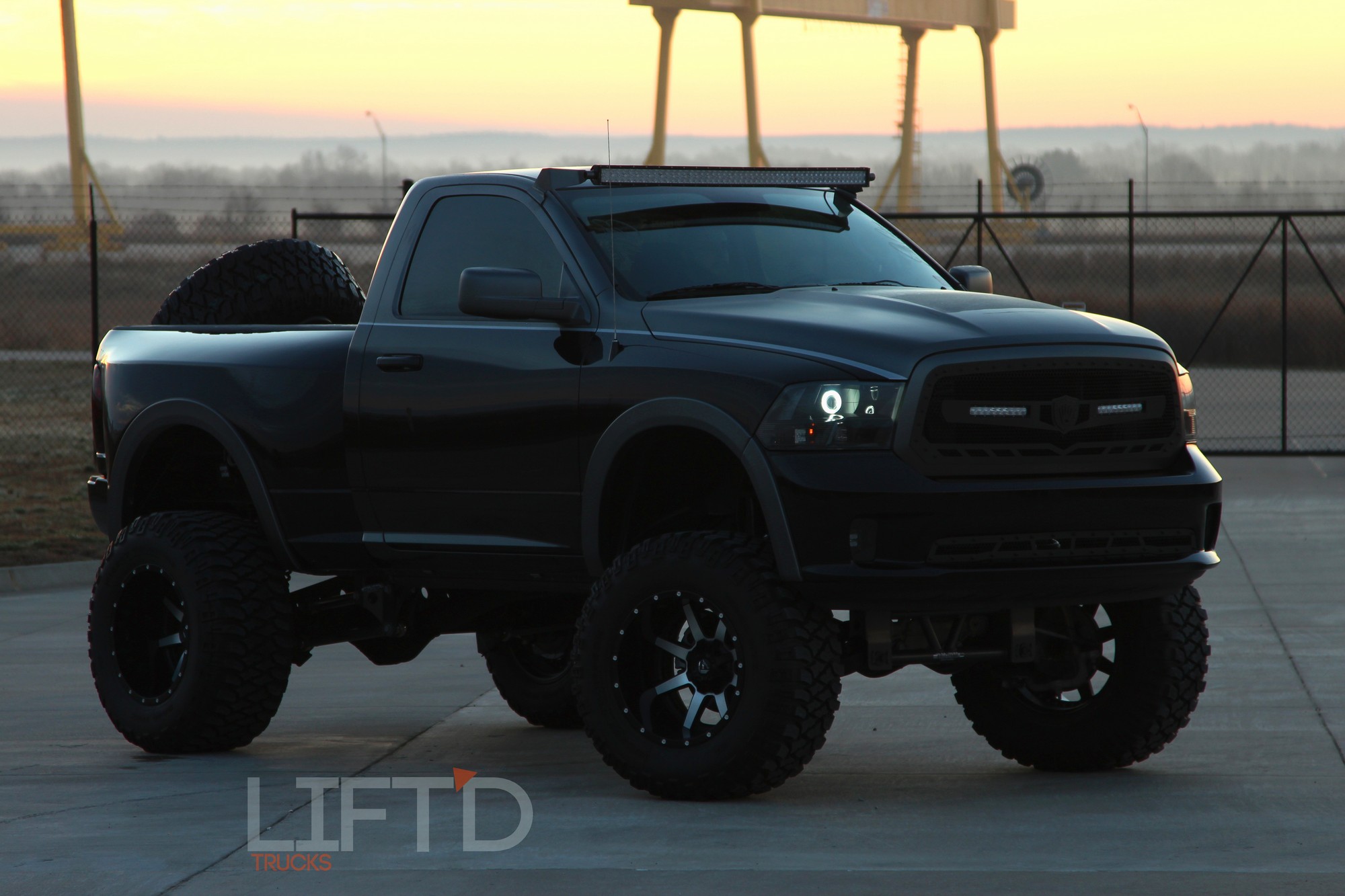 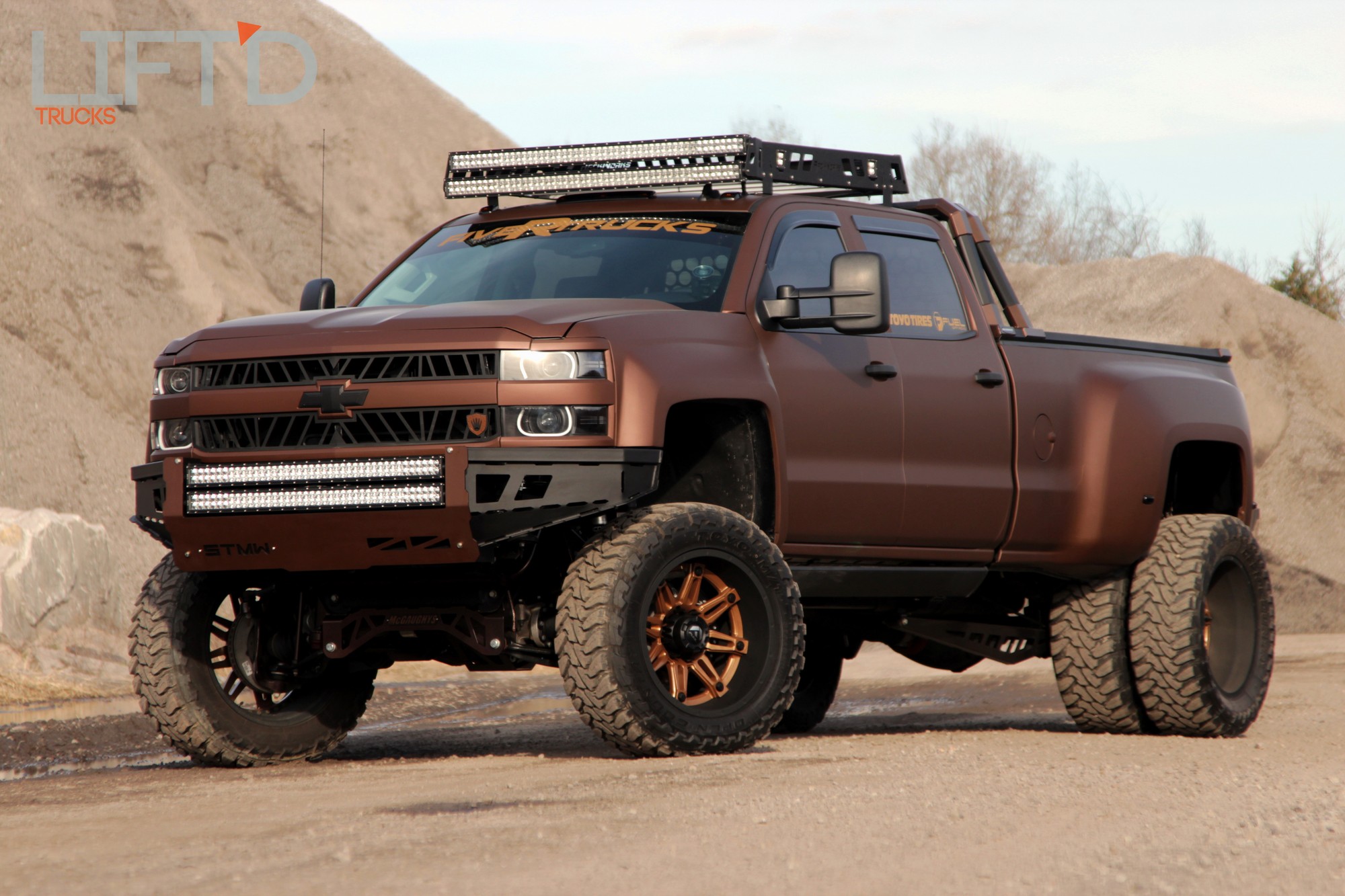 Lift’d Trucks: When did you start KEG Media and what led up to the decision to start your own business built around automotive renderings?

Robbie Bryant (KEG Media): “I started KEG Media in 2002 under the name Kutting Edge Graphix. I was managing a custom shop in St. Louis running the day-to-day and when I would get off at night I would go home and open up Photoshop and taught myself how to lower and paint cars and switch out wheels. After many long nights of practice and posting samples I started getting asked to do them for others. At first I did them for free to practice and get better and then I started getting really busy. I realized that my ‘free’ time wasn’t really free so I started charging a bit. I gave it a name, quit my job and the rest is history. A couple years into it I met this young kid named Brian Fields who would hit me up on Street Source and ask me to critique his work. He was trying to get into the rendering market. He started getting pretty good so eventually I hired him and he now runs my company for me when I’m traveling. In year eight we decided to do our first SEMA Build and ever since then things have just skyrocketed. A couple years ago we needed another designer to help handle all the business we had, so I reached out to Marcus Talamantez, who had his own rendering start up biz and offered him a position with Keg Media. Marcus was getting pretty good and I knew with some pointers he could be great. Now Marcus and Brian are our lead designers and produce the quality of work you would expect to see from Keg Media.” 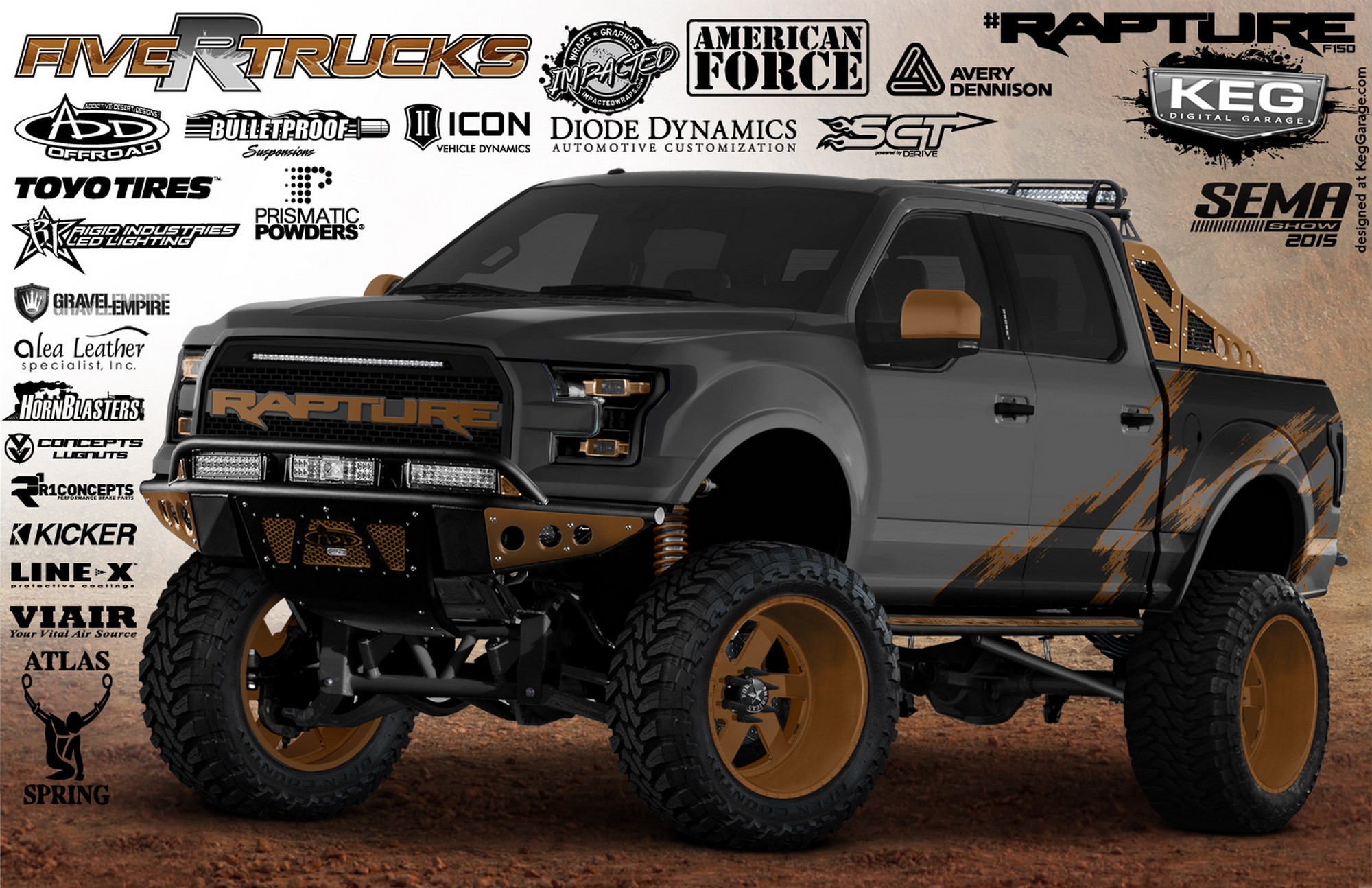 Lift’d Trucks: How did you come up with the name KEG Media?

Bryant: “Originally I called it Kutting Edge Graphix because at the time most people were doing hand drawn renderings and computer renderings were still very much on the “cutting edge” of things.”

Lift’d Trucks: Did you have any formal training or schooling for your career?

Bryant: “Nope, completely self-taught from graphic design to the business side of things.”

Lift’d Trucks: How many custom builds do you think you’ve been a part of since you started KEG Media?

Bryant: “If you’re talking about being a part of builds rendering and design wise, I would have to say close to around 2,000 or so.”

Lift’d Trucks: What are some of your favorite builds, either for customers or your own personal builds?

Bryant: “I’d have to say some of my favorites are the builds we have had built for ourselves. My Audi A5 known as DISTILD is my current daily driver and I love that car. I was also very excited about my wife Keena’s Tundra we did last year with Complete Customs in West Texas. My 2014 Red and Black Silverado called Trilogy is also at the top of the list. When it comes to ‘bagged trucks, we did a phantom dually supercharged Ram last year called BUBLBUT that I wish I would have kept, but a buyer approached me at SEMA in our booth last year and gave me an offer that I just couldn’t refuse.” 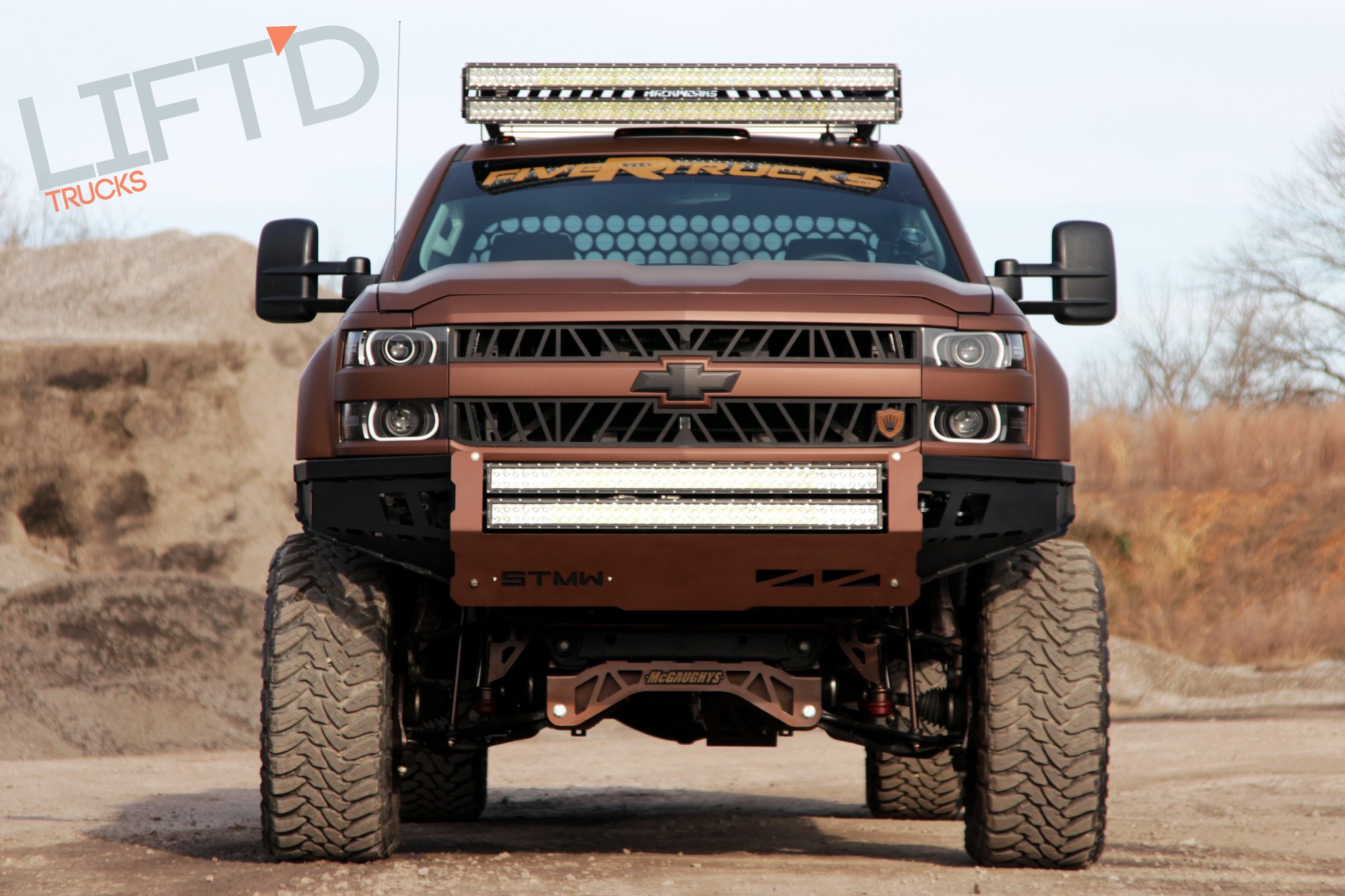 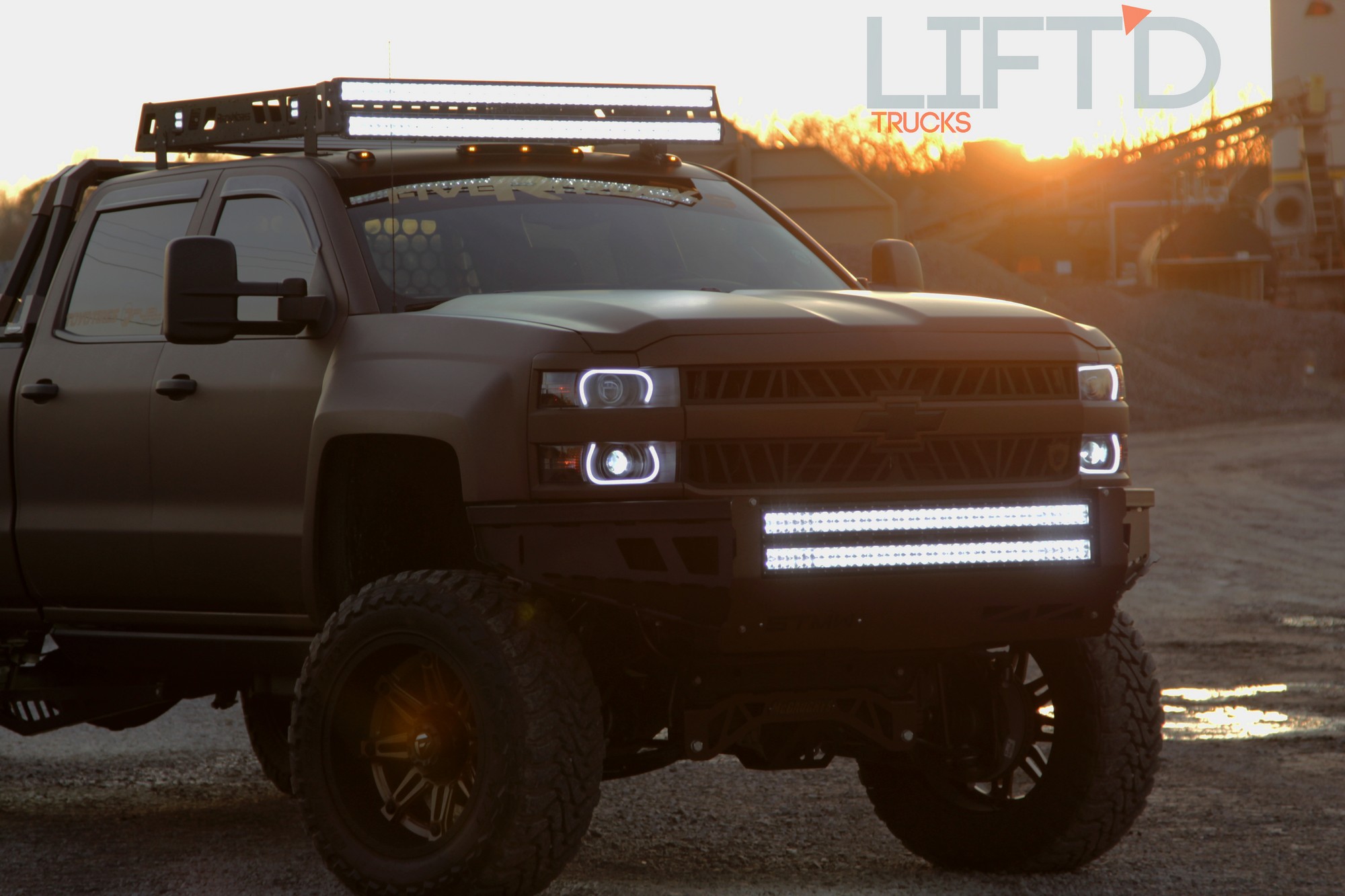 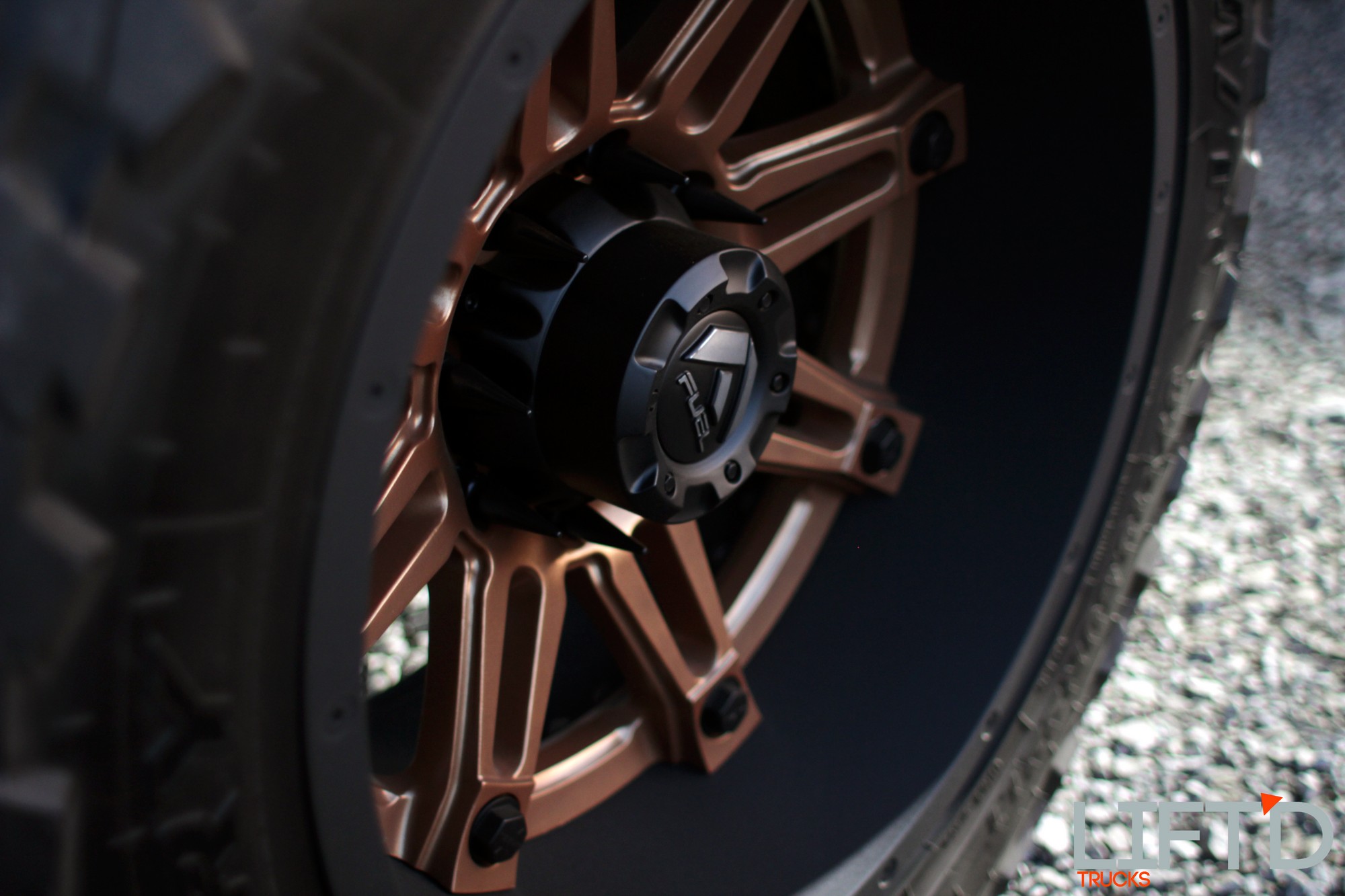 Lift’d Trucks: What awards have you/your company received for your work?

Bryant: “Many of the vehicles we have designed have gone on to win the coveted GM Design and Ford Design Awards. For our own builds, we have won Best Car, Best Paint and Best Suspension awards. Also my Audi was picked as Slam’d Mag’s Car of the Year, which was also a great honor.”

Lift’d Trucks: How has KEG Media grown over the last several years?

Bryant: “Keg Media is an industry leader in custom truck design. Every year we experience substantial growth. We have added more employees and explored new ways of marketing our brand. Now a days we average about a rendering a day; considering we are actually off on weekends and most holidays it’s actually a bit higher than one a day, but we continue to find creative ways to keep growing.”

Lift’d Trucks: Where do you see KEG Media in say five years from now?

Bryant: “I see Keg Media as a powerhouse in the industry in the next few years, even more so than we are now. We will continue to grow because we never look back and never get comfortable with where we are at. We have some things we are working on that will definitely be game changers when it comes to renderings and designs.” 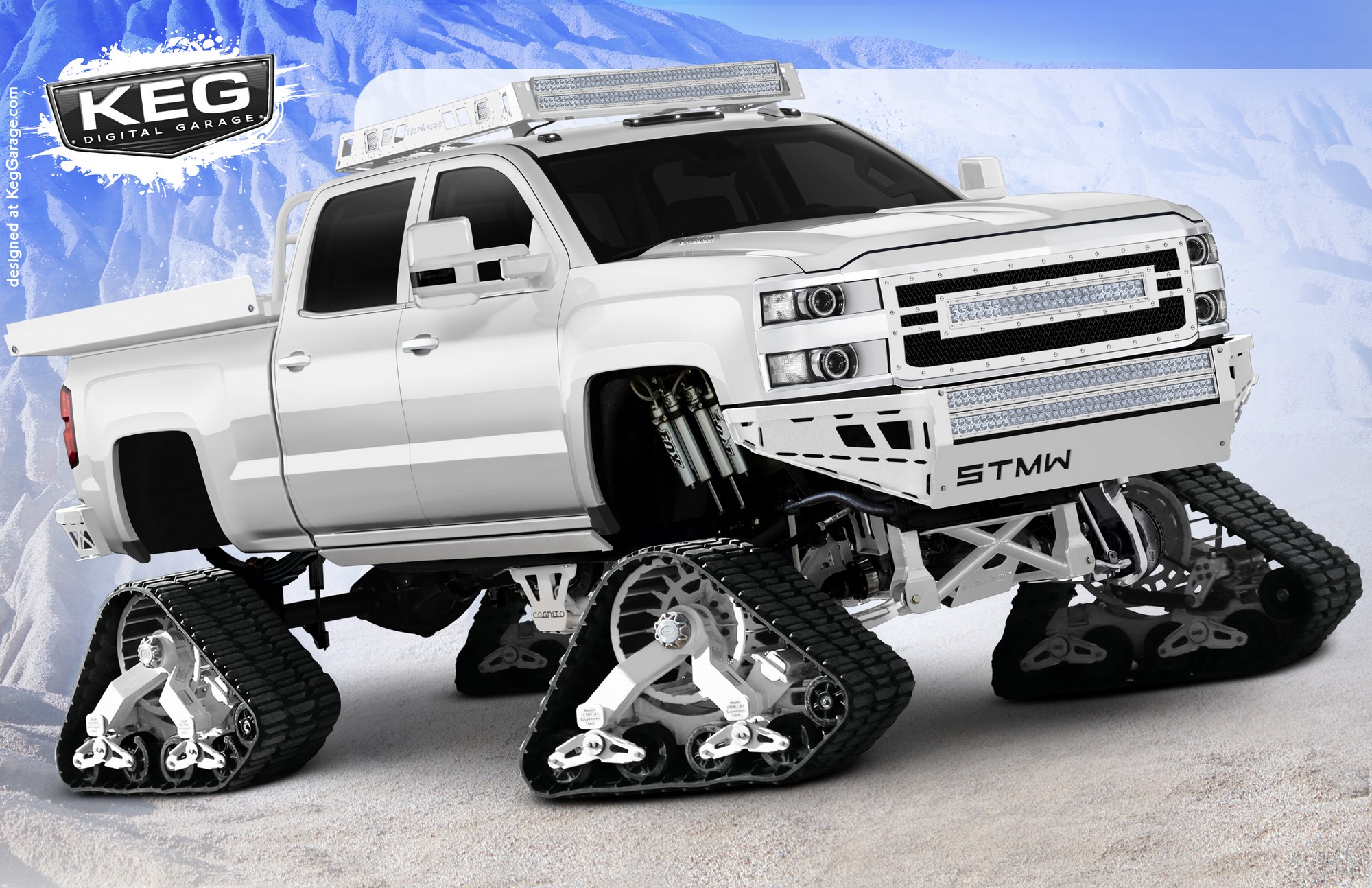 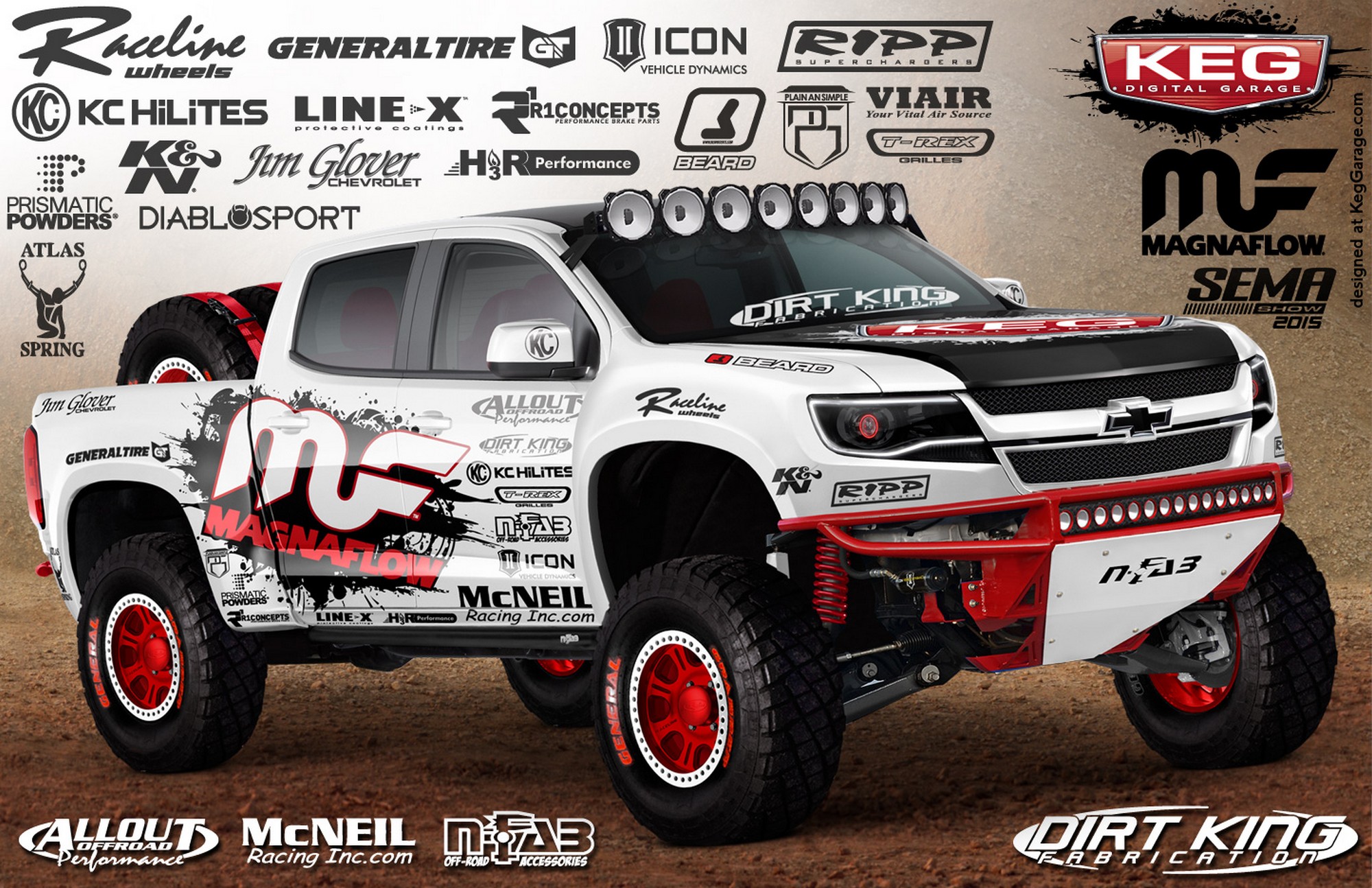 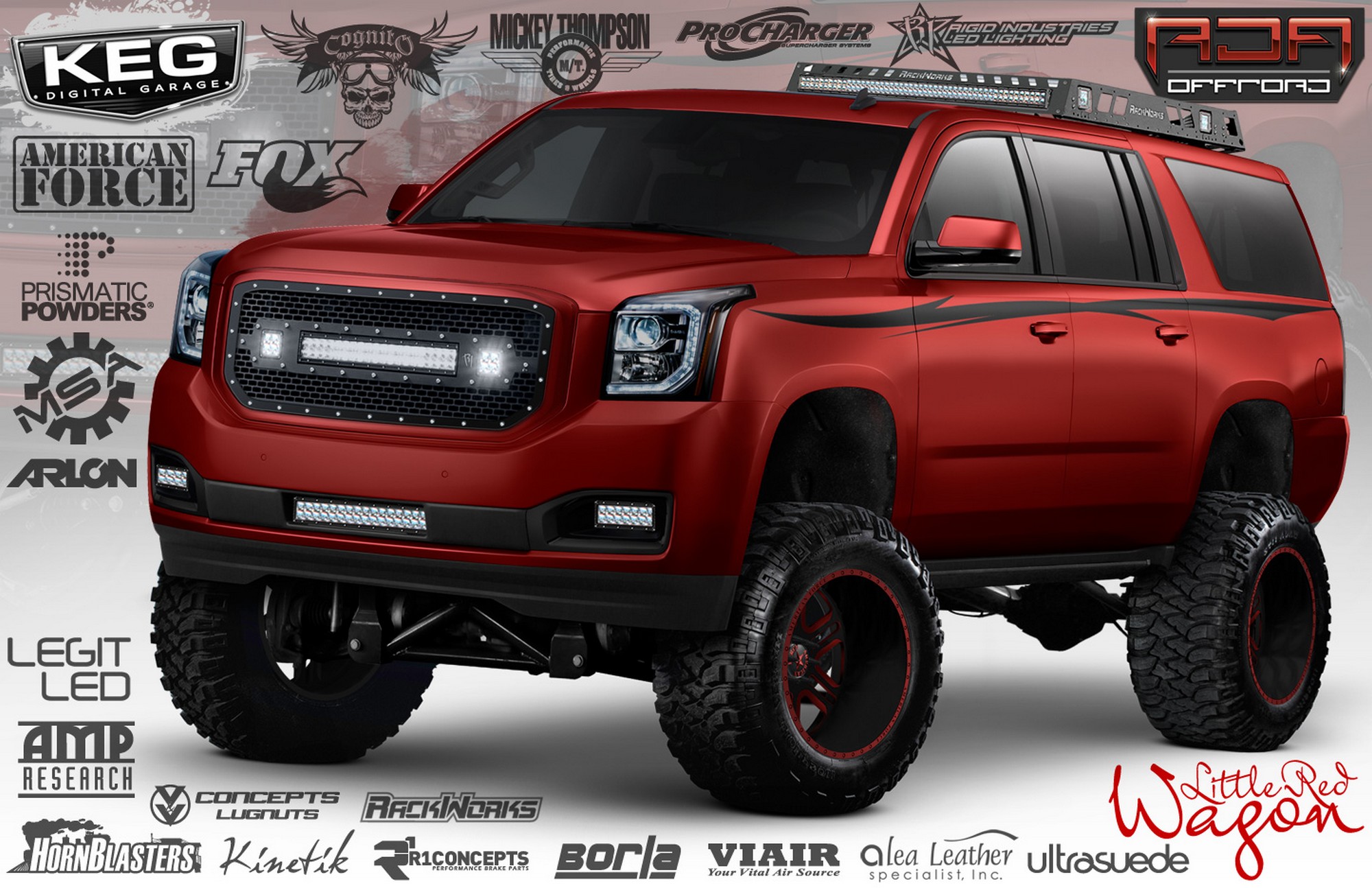 Lift’d Trucks: What can we expect to see from KEG Media at the 2015 SEMA Show in Las Vegas?

Bryant: “We will have 13 builds placed throughout the SEMA Show this year. Most of these will be booth placement in some pretty high profile booths. In our own Keg Media booth, you will see the first ever 2015 GM Dually with a short bed conversion and 2015 Yukon front clip. It’s stock-floor bodydropped on 26s and fully deleted and custom tuned. Each year we have manufacturers reach out to us to provide builds for their booths and that is definitely a direction we see Keg Media going bigger in for the future – providing high profile vehicles for marketing.”

Lift’d Trucks: We know you have a fairly large family… have any of your kids shown interest in getting into the automotive industry like their dad?

Bryant: “Actually funny you ask that, it hasn’t really happened like I had hoped but we won’t force the issue, we just want them to be happy and be into whatever they like. They also see that I work a lot and travel a lot, so they may think that it’s a lot of work, which it is. But my kids are free to choose their own path in life; freedom to be who they choose with our total support. My wife Keena and I have five sons ranging in age from 2 to 19 years old and we just recently were blessed to adopt an 8-week-old baby girl named Hadley. Our sons, in order of oldest to youngest, are Dakota, Pierson, Jaxon, Keeton, and Hudson. We are very blessed and I put my family first.” 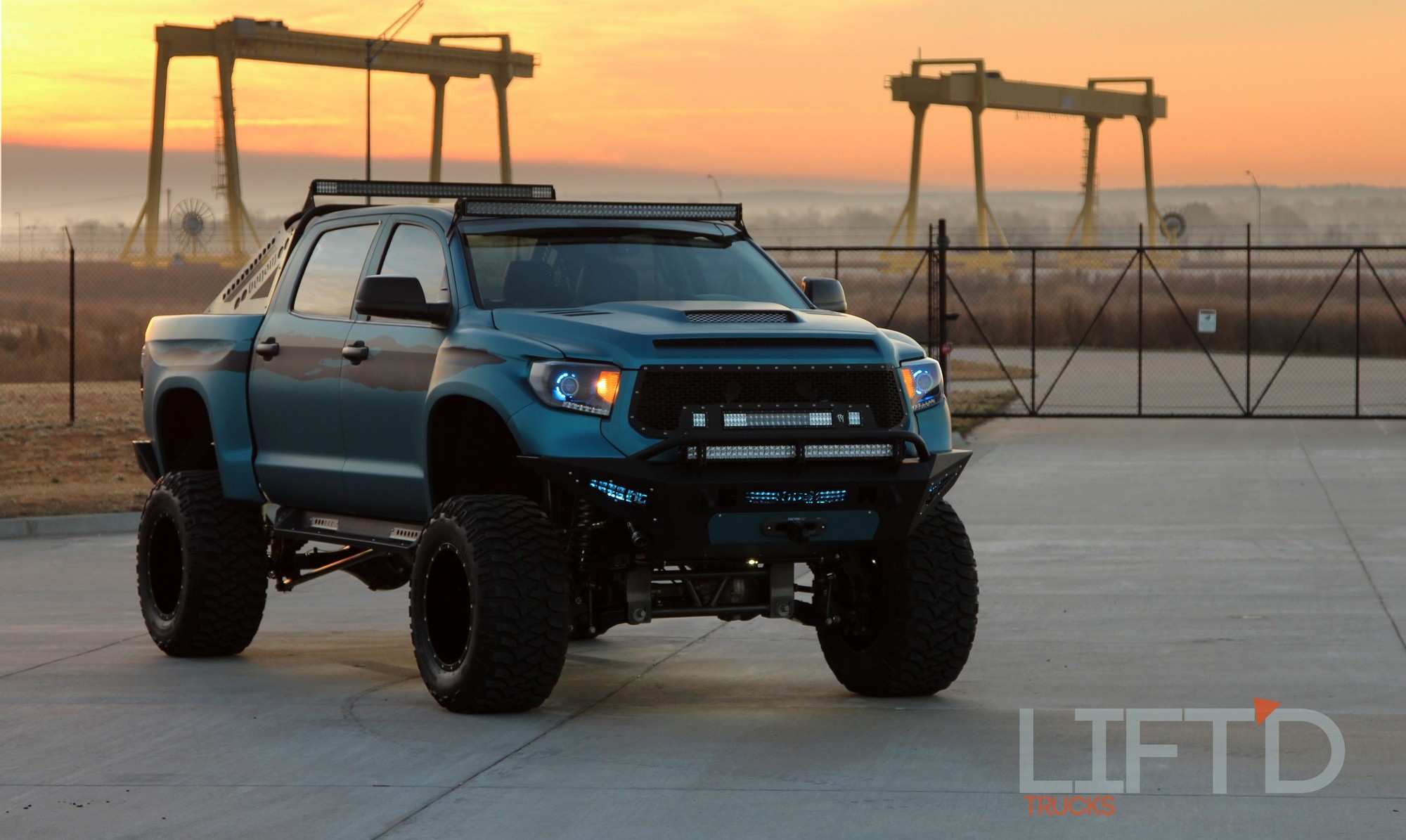 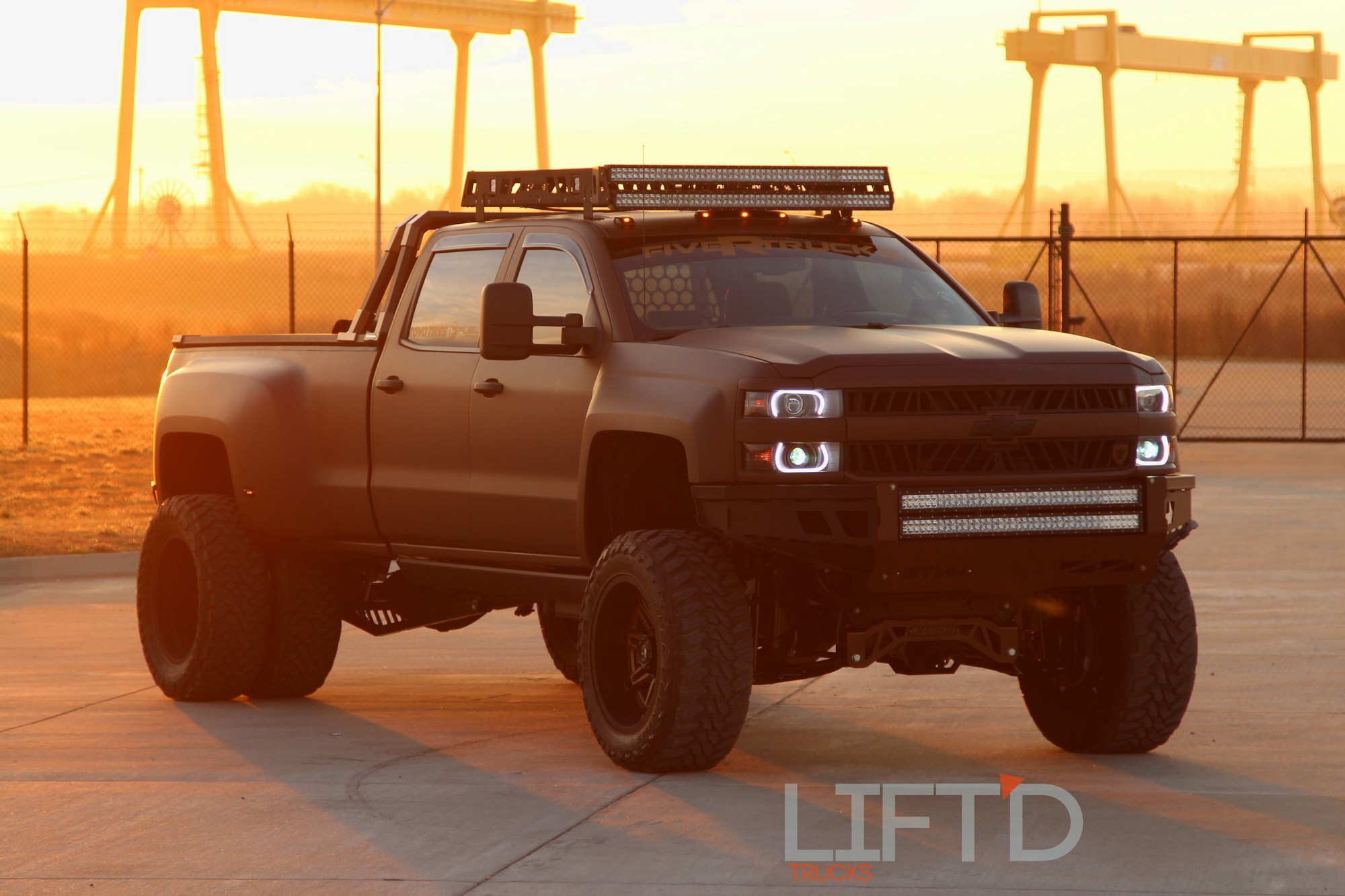 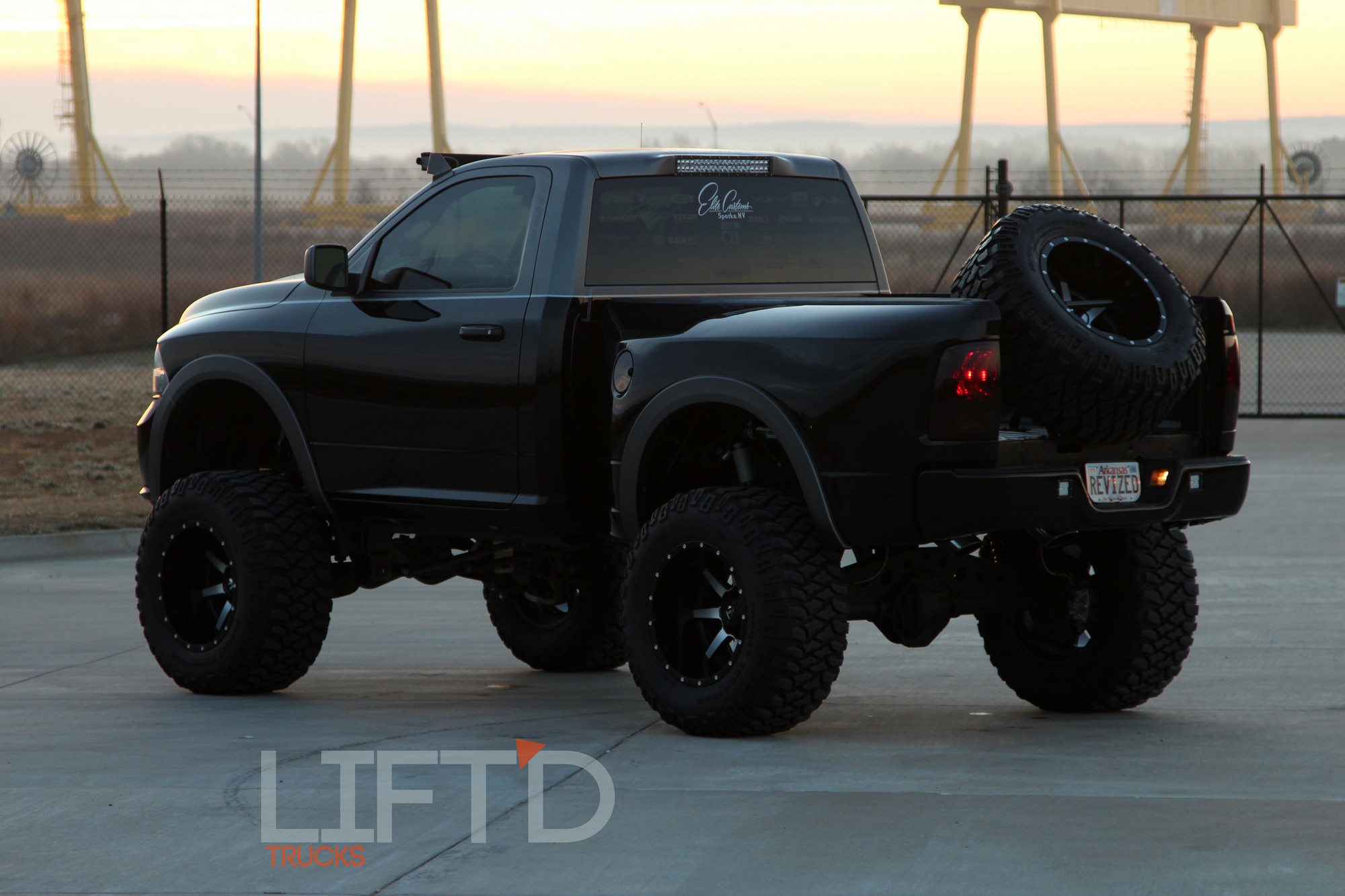 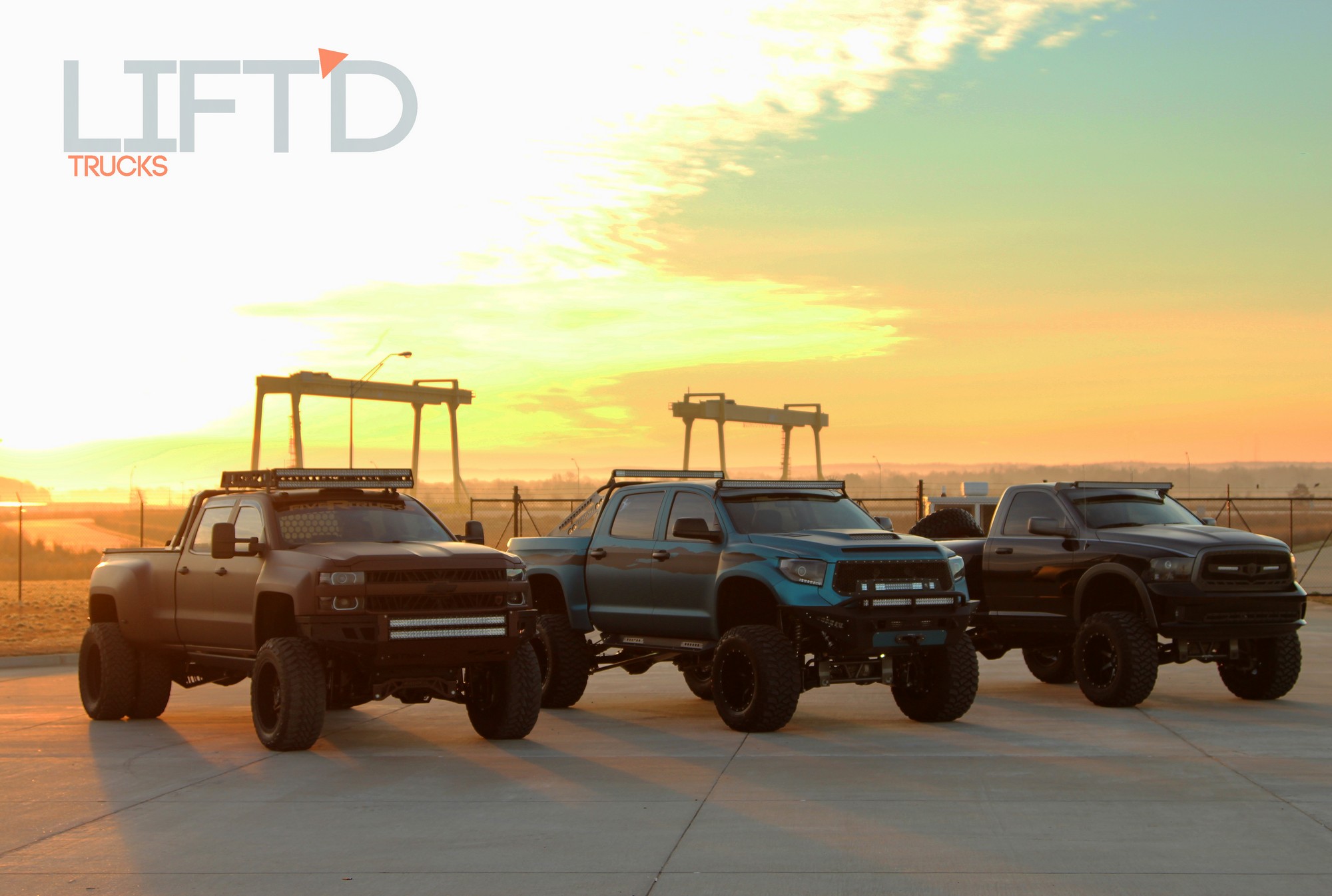 Lift’d Trucks: How do you balance family life with everything that comes with running such a successful business?

Bryant: “Luckily for me, I have a very supportive wife and kids. They understand that Dad works and he works a lot. We do take a lot of trips and every year for Christmas we make it special by taking the kids to Disney World or on a Cruise. We do that so they always have something to remember long after the gifts are forgotten. Memories are what last forever, not things, and we try to instill this in our kids by creating great memories that hopefully they’ll cherish forever.” 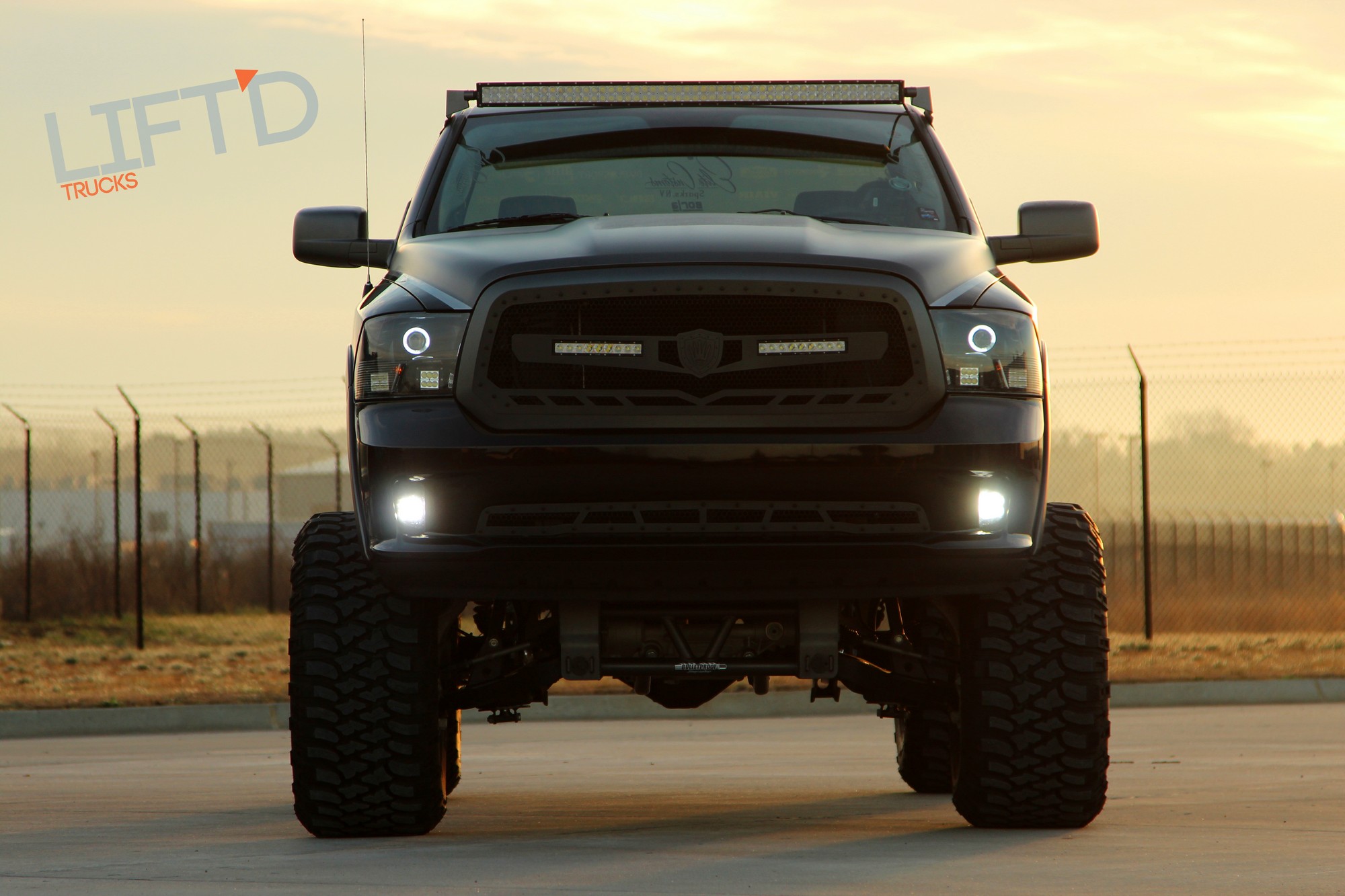 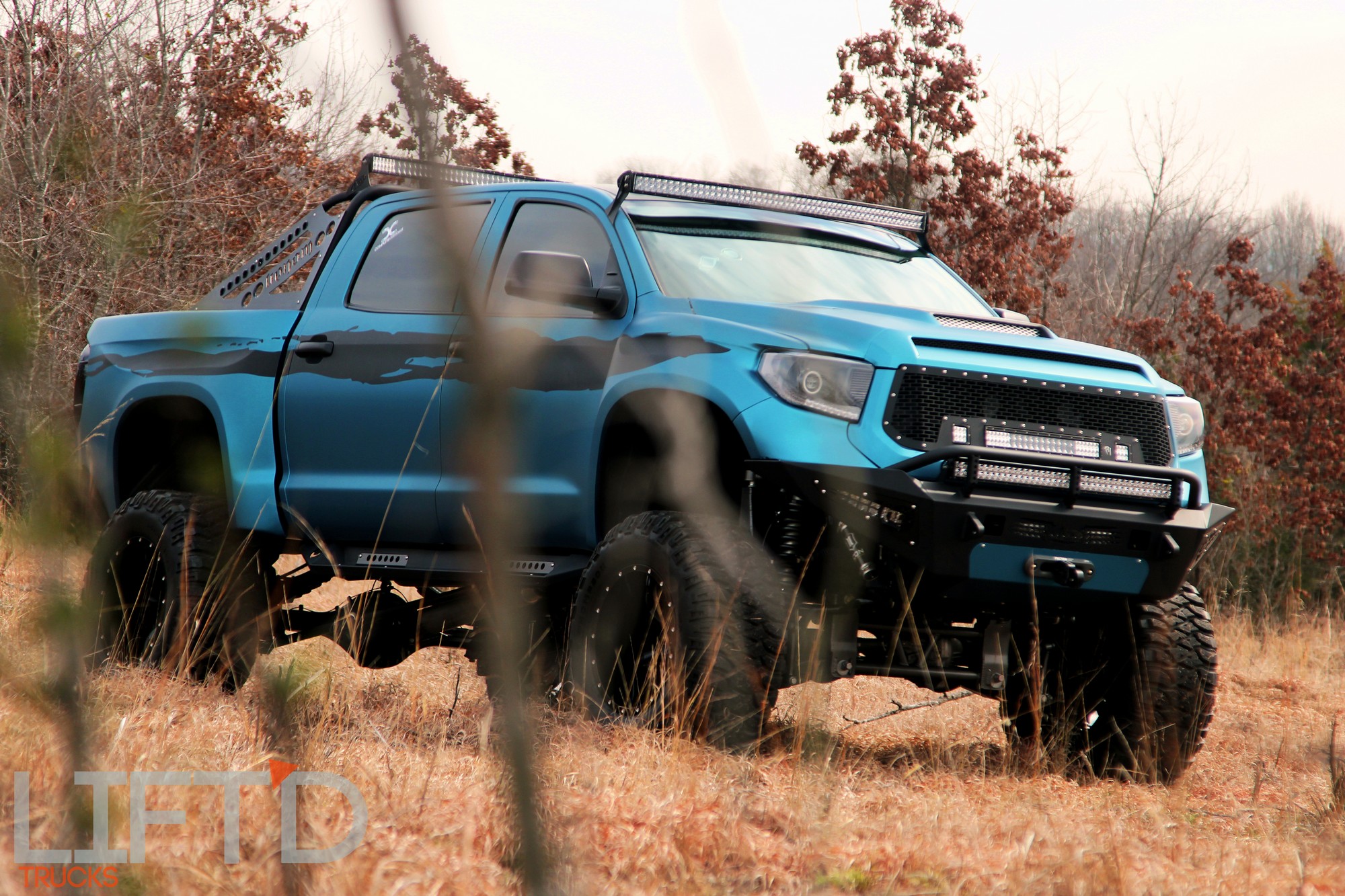 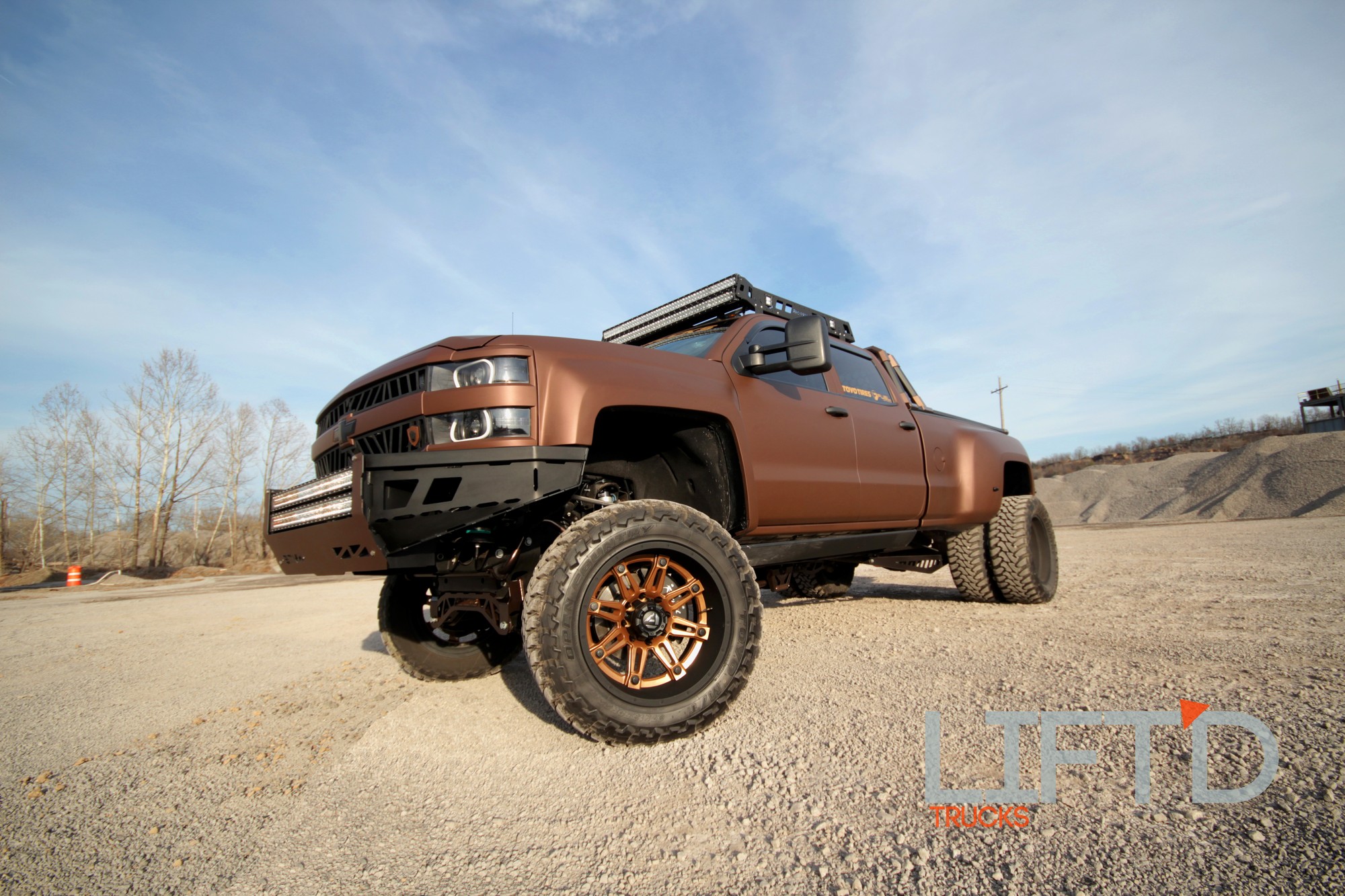 Lift’d Trucks: Is there anyone you’d like to specifically thank for their influence on your career, or support of what you do?

Bryant: “My influence for designing custom builds has and always will be Chip Foose. This man is a legend and very talented yet is also very humble. I’ve had the chance to meet him a few times and each time it was like he was just an ordinary guy. When it comes to producing our own high-profile builds, I would have to say I looked up to Craig Elder. Years ago, this guy would have cover truck after cover truck of both lifted and ‘bagged rides. I always looked up to him but he never knew it. Now I have a lot of guys that look up to me for inspiration and sometimes call me the Chip Foose of the lifted truck industry, which is pretty humbling for sure.”

Lift’d Trucks: What do you enjoy most, or find the most satisfying, about owning and running KEG Media?

Bryant: “I’d have to say seeing how big it has grown over the years. Knowing that I started it without any design education and just working from my computer at home to becoming a brand in the industry that everyone recognizes. Being able to work for myself and employ great guys and being able to provide for my family with something that was created from nothing. These are definitely points of pride in building something from scratch and watching it blossom through the years.”

Stay tuned as we’ll be covering much more of the Keg Media brand and builds right here in Lift’d Trucks! 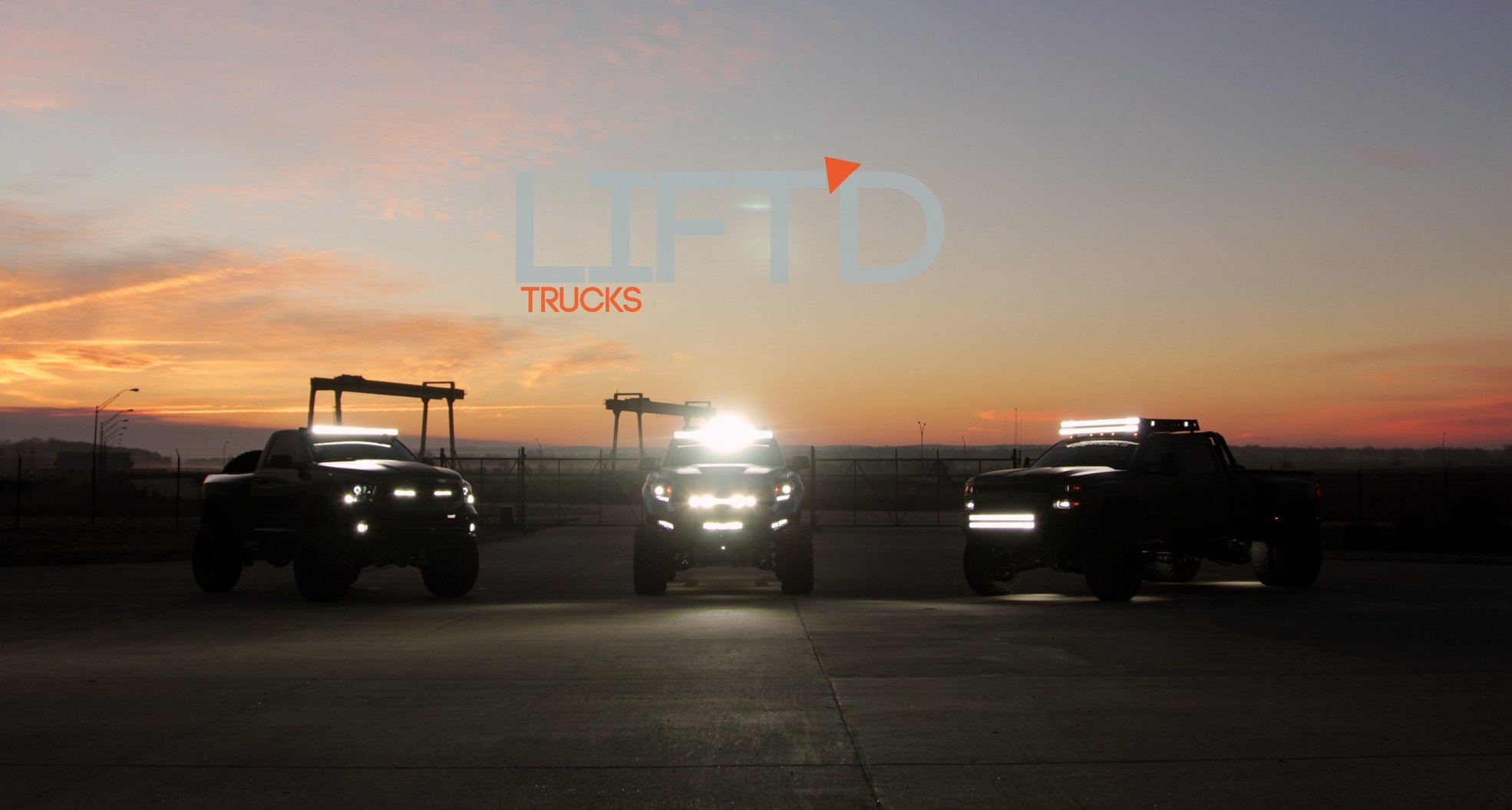 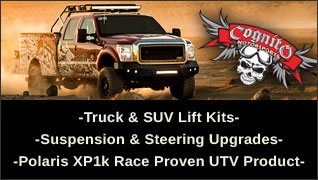 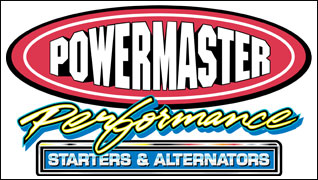